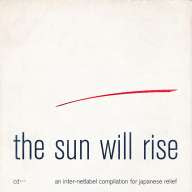 Here are some updates about netlabels and netlabelism:

The Netaudio London festival passed without any significant notice, despite the presence of Nurse with wound and Bruce Gilbert. You can read a review on netlabelism.com

The upcoming Netaudio Lissabon festival is postponed, due to technical reasons. Read more in this press message.

This year there was no Cologne Commons festival, as you noticed of course. The reason why is unclear. We hope we can rejoin them next year, because it's a cozy party.

"The Sun Will Rise" is a 'Inter-Netlabel Compilation for Japanese Relief'. This release is an artistic support for the victims of the disasters in Japan. You can download the album with mostly ambient, downtempo, chill-out music from the IA parking. The project just closed down the donation part. More info at the project's website.

The famous Spanish techno-techhouse netlabel Offaudio quits the netlabel scene. Read more at their website: "After 7 years, Offaudio says adi�s". No reason is given for the departure, but as with lots of gone netlabels, we presume personal change-of-life reasons are an important factor for this kind of decisions. Pity.

The Spanish netlabel e-zine "Netlabels & News" has moved to it's own server: http://netlabelsnews.org/