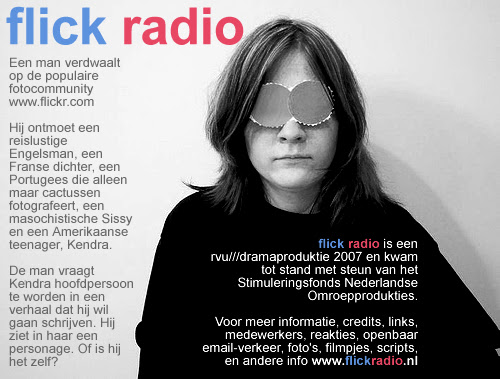 Almost forgot to blog about this rising hit called "Flick Radio". It's a movie, well, not really a movie, but rather a compilation of photo's taken from Flickr.com accompanied by the voices of 5 photographers who make the story. It's a nice mix of images and the reflections about what you see or don't see and about the virtual contacts.

Written and directed by Bert Kommerij, music by Marco Raaphorst and others, video adaptation by Pepijn Kortbeek.

All pictures used come from Flickr.com and were published, like this movie itself, under Creative Commons liscensing. It's spoken English/Dutch and subtitled Dutch/English.
There's also a YouTube version