the balls of Brussels

The balls of Brussels - the Atomium - were built for Expo '58 and exist 50 years. The architect of the project Waterkeyn decided to protect 'his' concept by putting his rights to the collecting society Sabam. So, everytime someone wants to put a photo of the Atomium on his website, he has to pay about 90,00 euro/month. One estimates that the income of all payments to Sabam ammounts to about 30.000 euro/year, and this goes to the heir of the late architect (he died in 2005) till + 70 years after his death = 2075. Because this year is the anniversary of Expo '58, the organisation of the Belgian heritage in Mechelen planned to do actions whereby people would send their old pictures of those old days, and to put them on the web, blogs, ... Because of the Sabam rule, the organisation did a playful call ("cultural guerilla") for 100 people to help 'photoshop' away the balls on all the photographs. Sabam replied that this year is an exception, and people can publish for 1 year the images, as long it's in a non commercial way.
Now i wonder, who ever paid this building, and who owned it then (and now). I mean, if this building is paid by taxes, i should think that the belgian state owns this building and all it's plans, and that the architect made it as an employee of the same state, and has no right to put a copyright on plans made for his employer. Can anyone help me sort this out?

links (dutch): Stad Mechelen start guerilla tegen copyright op Atomium Sabam in het nauw Dure bollen Warning on Wikimedia Commons: "Do not upload images of the Atomium in Brussels. This building is copyrighted artwork. Nobody is allowed distributing his own photos of the Atomium without the consent of the copyright holders in Belgium and other countries without the Freedom of Panorama. So all Atomium images will get deleted in Commons on sight. Thank you for your cooperation."
Freedom of Panorama??? wtf! ... 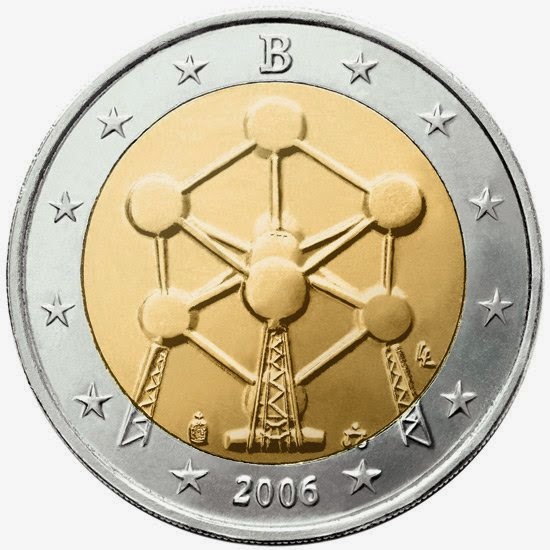 Even for the commemorative coin, the European Central Bank must have been paying to Sabam: