music from the past into the future 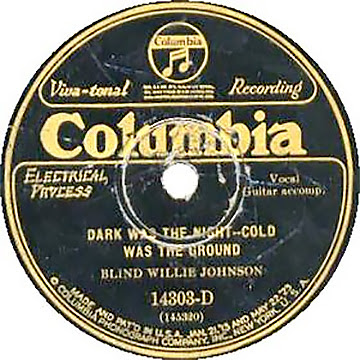 From the Mothership:
"How would you go about introducing humanity to anyone and everyone in the universe? That was the curatorial challenge facing NASA’s best in the 1970s as they prepared to launch the Voyager One probe in 1977. They decided to include the Voyager Golden Record as part of the intergalactic calling card—it featured twenty-seven seminal songs, including Blind Willie Johnson’s 1927 recording, “Dark Was the Night, Cold Was the Ground.”

The project managers made an excellent choice; John’s lament about sorrow, pain, and loneliness, pain is timeless. That’s what makes it a great selection: Voyager 1 won’t be within 1.6 light years of AC+79 3888 until some 40,000 years from now. Between now and then, you can always listen to it at the Internet Archive."
Newer Post Older Post Home